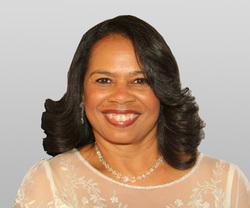 Evangelist LaVette D. Gibson was raised in a Christian home and with the strong influence of an extended Christian family.  Her great-grandfather, Pastor Thomas F. Jones, was the founder of Peoples’ United Community Church in Watts, CA.  Mother L.O. Hale, LaVette’s great-grandmother, served for forty-five years (1935-1980) as the Supervisor of Southern California First Jurisdiction.  She had a tremendous impact upon LaVette’s spiritual life, which commenced at the age of sixteen with her acceptance of Jesus Christ as Savior and Lord.  In 1974, just before departing for her freshman year at Spelman College in Atlanta, Georgia, LaVette received the baptism of the Holy Spirit.  This experience equipped and empowered her for the life journey which lay ahead.

At Spelman, LaVette majored in Political Science with an emphasis in pre-law.   Her career goal was to become a criminal lawyer.  It was towards the end of her sophomore year that she received her calling into the ministry with these words from the Lord: “Your vocation and ministry shall be one.”  In obedience to this call, LaVette left Spelman at the end of her sophomore year, and enrolled in Southern California College (now Vanguard University) in Costa Mesa, CA.  Vanguard University is a Liberal Arts Christian College sponsored by the Assemblies of God denomination.  There, LaVette majored in Religion/Biblical Studies, and graduated with a B.A. Degree in May 1980.

LaVette’s professional career has consisted of the following:
On December 26, 1981 LaVette D. Beamon (maiden name) was united in holy matrimony with Minister Ronnie M. Gibson at the Christian Life Church in Long Beach, California.  From the beginning of their union, the couple worked as a dynamic team in Christian ministry conducting numerous revivals throughout Southern California.  In 1983, the Gibson’s were led of the Lord to move to the city of Riverside.  They thought the move was simply for real estate, but God soon revealed to them the relocation was for ministry.

In May 1987, Sister LaVette Gibson assisted her husband in the establishment of Life Church Of God In Christ in Riverside, California.  The Lord has tremendously blessed this work – even beyond their greatest expectations!  In addition to serving as the Life Church Chief Administrative Officer, Sister LaVette also serves as the Curriculum Developer and Instructor of the New Members’ Class, President of the Missionary Unit, President of the Women Of Life (the Church’s women’s ministry), and Founder of the Life Builders’ Prayer Breakfast and Conference.  In March of 2008, the Lord directed her to implement a 12:00 noon class on Wednesdays, entitled “The Abundant Life Bible Study.”

In 1986, LaVette received her Evangelist Missionary License under the late Mother Lillian A. Morris.  In addition to laboring by the side of Pastor Ron Gibson, Sister LaVette ministers the Word of the Lord with power and demonstration.  She ministers particularly at Women’s Retreats and Seminars being used mightily of the Lord in the area of inner healing. For approximately twenty years, Sister Gibson was favored to work under the unparalleled leadership of Dr. Barbara McCoo-Lewis, Supervisor of Southern California First Jurisdiction.  She was privileged to serve the Department of Women in many capacities.  In 2006, Mother Lewis honored Sister Gibson with the appointment of 2nd Administrative Assistant to the Jurisdictional Supervisor.  In 2009 the Lord directed Sister LaVette to release this, and other positions in the Jurisdiction, to focus more on the ministry of Life Church.  The training, impartation, and opportunity received during the past two decades of service to Mother and the Department of Women are priceless, and shall be forever cherished.

When God first called Evangelist LaVette Gibson she had no idea where and how He would use her.  Now, she says with understanding and conviction, “Where He leads me, I will follow.”